I SETTE MESSAGGERI
curated by CURA.

“Gone to explore my father’s kingdom, day after day I’m moving away from the city and the news that get to me are getting rarer. Though leaving light-hearted – far more than I am now! – I was concerned about being able to communicate, during my trip, with my dear ones, and among the knights of my escort I chose the best seven, to serve me as messengers.” (1)

Through breaking into the mythical imagination described by Dino Buzzati in the story by the same name, seven messengers offer the spectator a magic land, a mysterious kingdom, a polyphonic stream of past, present and future experiences.

embody the seven characters of a story/exhibition embedded in the narrative cracks of the original story.

A reflected and projected image immediately introduces us into a mythical and narrative dimension. Something has certainly already happened. An empty, no longer used sedan chair states so. There is no human presence, only memory. A choir of voices echoes from afar. This is the story of art that recounts itself. It is an amplified oral tradition, which in the mythical world is the only common heritage. The original texts have been lost. A curtain at the back opens and closes. It is beginning and ending. It is paradox. It also highlights the emptiness of images that are reflected, where everything is mixed and muddled. Past and present live in an exotic and suspended dimension. A scorched landscape, a border land. The one on the ground can be walked on. No longer mythical but real. It brings us back to the present. It is the promised land of Lampedusa. A new horizon that tells us about new borders. Oversize shoe soles do not walk on the ground. They tell of an imagination which is fictitious in shape and size and at the same time familiar in color and in matter. And yet, a pictorial, allegorical, perhaps apocalyptic dimension is in the incarnation of Judith, who takes back Holofernes’s head and thus saves her people.

“But more often my doubts arise that this border does not exist, that the kingdom extends beyond limit, and that, as much as I may go ahead, I will never reach its end.”

The seven messengers represent the vectors of a spring path which is choral, multi-level, in a never-ending sliding of time and space. They incarnate an emotional state stretched in opposite directions: change, self-knowledge, rooting in one’s own origins. It is what is left of the memory, after forgetting everything. It is the very meaning of culture.

“There is, I suspect, no frontier, at least not in the sense that we normally think. There are no separation walls, no dividing valleys, nor mountains closing the path. I will probably overcome the limit without even knowing, and keep moving forward, unknowingly.” 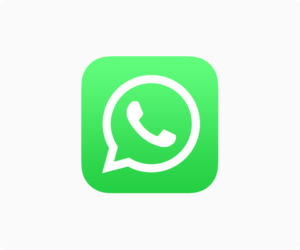 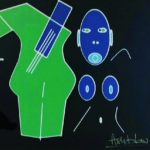 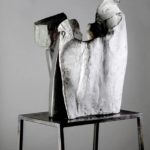